Life is full of many defining moments. For Olympic trap athlete Penny Smith, she faced her sporting career crossroads in 2012.

Smith had the talent and ability to enjoy a successful sports career in either shooting, equestrian, netball or women’s AFL, but the moment had come to make the decision to fully commit to one sport. She knew something had to give.

“Life was hectic at that time. It was hard to fit everything in. It came to that point where I had to choose whether I wanted to play netball, ride my horses, shoot or play football,” said Smith.

“Growing up, everyone’s dream is to go to the Olympic Games, and it was certainly a dream of mine. I just didn’t know in what sport that I wanted to do that in,” she added.

Raised on the family dairy farm in Bookaar, a tick over 200 kilometres west of Melbourne, equestrian was in her blood. She could walk out the back door and across to the stables and jump onto her horse and continue her passion for equestrian.

Her parents Michael and Kim were both avid horse riders and Kim attended the 1984 Los Angeles Olympic Games as the groom to equestrian Andrew Hoy. As a family, they would regularly compete at the Royal Shows in Melbourne, Adelaide, Canberra and Sydney. Women’s AFL was on the rise in 2011 and after playing a season with Warrnambool, her ability in the ruck and centre half-forward was recognised by the representative selectors and she was chosen in one of two Victorian teams to contest the AFL’s Under 18 National Girls Championships on the Gold Coast and attend the AFL Women’s Academy In Melbourne.

Smith was also playing netball and winning premierships playing as goal shooter with Kolara-Noorat in the Western Districts age competitions.

And she was also juggling her shooting career which commenced after her older brother Andrew, an Oceania Championship double trap gold and silver medallist, invited her to shoot after he took up the sport after a serious dirt bike accident saw him hospitalised for four weeks.

Within a few short years of firing her first shots, Smith won the South West Zone and Victorian schools titles and was travelling overseas and representing Australia as one of the world’s best junior trap athletes.

“After I achieved those two (school titles) goals, then I really knew that I wanted to focus on my ISSF (International Shooting Sport Federation) and pursue that and set a few goals along the way,” she said.

“I had that taste of wanting to better myself and be better and just seeing myself grow as a person. I had achieved a lot with my equestrian and I just found shooting was the next challenge that I wanted to take,” she added.

In the years to follow, Smith would contest world junior championships in Peru, Spain, Germany and Italy before graduating to the open shooting ranks.

Within two years of competing on the open world circuit, Smith cracked her maiden international victory when winning the 2017 World Cup competition in New Delhi.

Leading into the competition, Smith said she hadn’t been shooting well and, complicating matters further, her grandmother was ill in hospital. And it took some astute advice early in the competition from her coach Greg Chan to snap her into the moment.

“And he said Penny, ‘just look at the scoreboard’ and I said, ‘yeah okay’, and the scores were pretty low for the competition. And he said, ‘what does that say to you Penny’? And I said, ‘I don’t know – the scores are pretty average?’ And he said ‘no, that spells opportunity, so take it by the horns and run with it.’

“It’s something that really struck with me and I went out and shot 25 out of 25 in the next round,” she added.

Smith qualified fourth for the final and, with her grandmother watching the live stream of the event from her hospital bed, she then won the gold medal. 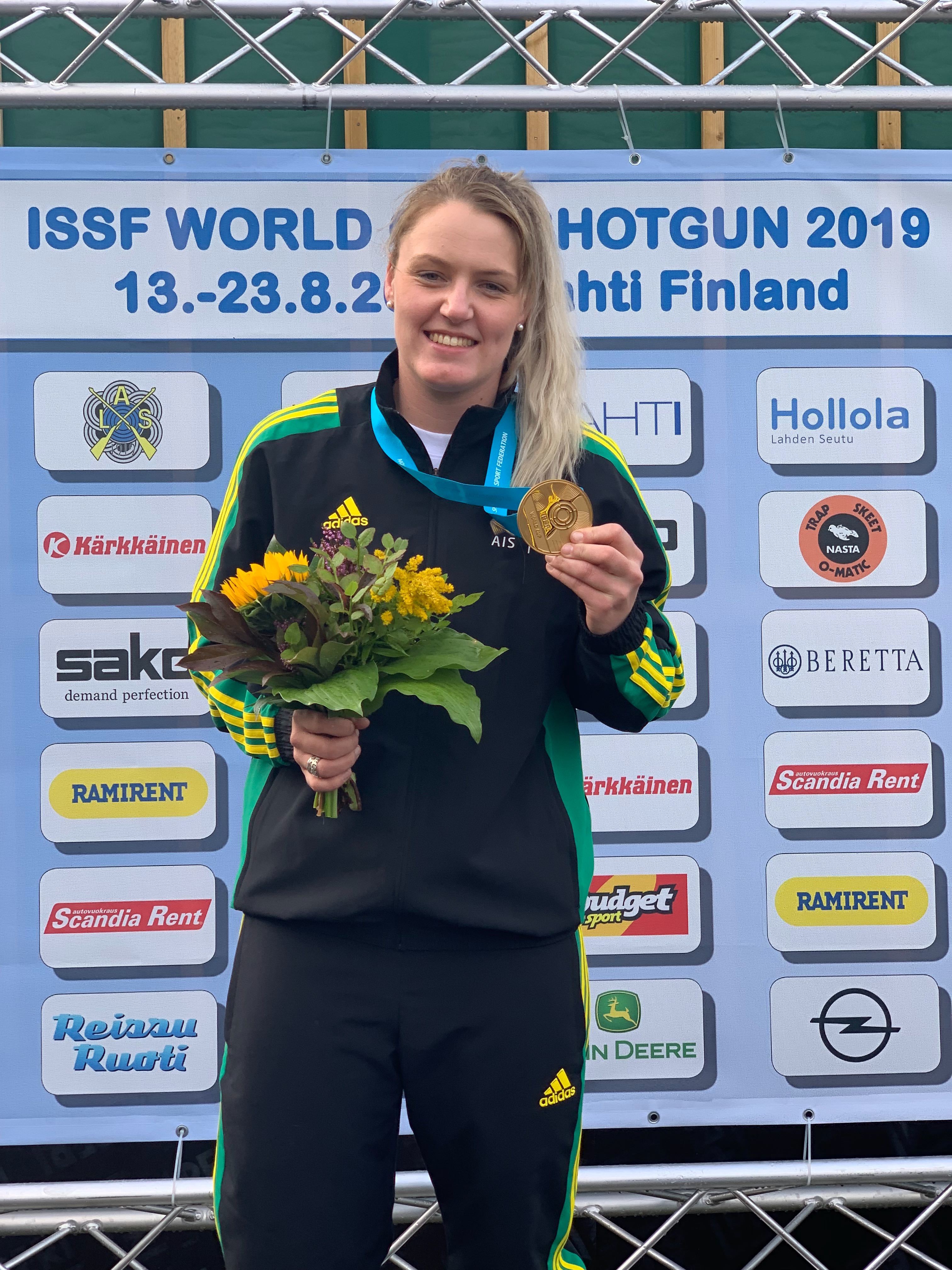 Despite this competition success and honours, Smith was controversially overlooked for Australian team selection for the 2018 Gold Coast Commonwealth Games.

Fellow Victorian, Laetisha Scanlan, topped the nomination trials to win automatic selection, and 2016 Rio Olympic Games gold medallist, Catherine Skinner, was given the nod ahead of Smith despite finishing third to Scanlan and Smith in the trials.

“It was pretty disappointing at the time and is still a bit of a sore spot for me being overlooked after finishing second. But things happen for a reason. It was a setback that I had to overcome,” she said.

“It was a hard time, but it didn’t stop me from training. You can’t let those kinds of things get to you. I’m not a quitter. There’s no point sulking. You have to get on with it and move forward.”

With her eyes looking ahead and not in the rear vision mirror, she set a plan in motion to win selection for the Tokyo Olympics.

“I certainly didn’t want to leave it up to the selectors again to be selected for the Olympic Games,” she said.

“I remember talking it through with my brother Andrew and he said if you want to go to the Olympic Games you have to be the first person to qualify for the team. So, we just worked our way through each match and took it out of the selectors hands.”

And Smith did so with an emphatic performance series display topping the qualifying rounds at each of the four nomination events. Then she placed an exclamation mark on the series with an outstanding victory in the fourth and final event.

“I was really pleased how the selection series went. It’s the most pressure that I have probably felt. Each match had its own challenge. It was nice to finish on such a good note,” she said.

With COVID-19 postponing the Tokyo Games until July next year and closing Victorian ranges, Smith is making full use of the Ball Trap range which has been set up on the family farm, plus following the strength and conditioning programs developed by the Victorian Institute of Sport.

The Tokyo Games will see women’s trap qualifying over 125 targets rather than 75 targets as per previous Olympics.

Smith favours the longer qualifying match saying; “It makes it a distance race rather than a sprint. I enjoy shooting lots of targets and I think it evens out the field a little more than having a 75 target competition and a final.”

Tokyo will also see Smith competing in the Mixed Trap where she has enjoyed international success.

She paired with Olympic team-mate Tom Grice to win the 2017 World Championship Mixed Pairs final, and then earned bronze in partnership with Grice at last year’s World Championship final. She also holds the mixed trap world record of 149 from 150 targets with Mitch Iles.

At only 25 years of age, Smith has the prospect of a long and successful Olympic and international career.

And her decision to target shooting as her elite sport of choice is one which may well prove to be the wisest decision of all.