The Vella fella aimed up for gold medal success

While Vella proudly represented the green and gold of Australia for more than two decades in a decorated international career, he could have easily been wearing the red and white colours of Malta.

When he was rising through the world rankings prior to the 2002 Manchester Commonwealth Games, Maltese officials learned that Vella’s father was born in Malta and emigrated to Australia when aged five.

In 2002, Malta was to host a competition for European nations and, even though he was born in Melbourne, Vella was a prime target to join their ranks.

While the offer to compete in a one-off competition for Malta had appeal, Vella quickly learned that he would be prohibited from representing Australia for four years and soon declined to participate.

“Once you get released from Australia, you then have to wait four years before they take you back,” Vella said at the time.

They were only denied a fourth consecutive gold medal when the Men’s Trap Pairs event was not included on the competition program at the 2014 Glasgow Commonwealth Games. 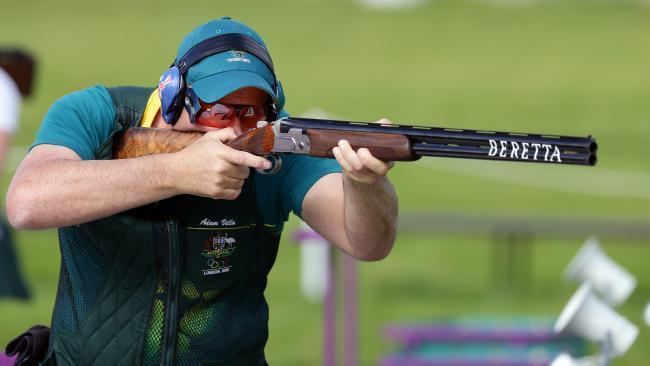 Together with World Cup silver medals in the Men’s Trap in New Delhi and Lonato, Vella’s world ranking in both Trap and Double Trap soared and he became the first person ever to be ranked world number one in both events.

Despite his outstanding performances on the international circuit, Vella’s career was mostly overshadowed by Diamond.

As the focus of the 2004 Athens Olympic Games drew tighter, all eyes were on whether Diamond could emulate the feats of women’s 100m freestyle legend, Dawn Fraser, and become the first Australian male Olympian to win an individual gold medal in three successive Olympics.

Competing in hot, windy conditions in Athens, Diamond could only manage 119 from 125 targets in the qualifying round and was a shock exclusion for the six-man final. Vella downed 121 targets to qualify fifth for the final.

After missing his third target, Vella was faultless for the remainder of the final and leap-frogged into the bronze medal position behind the peerless Russian, Alexei Alipov, and Italy’s Giovanni Pellielo.

Despite his early hiccup, Vella was steely focused and only glanced at the scoreboard with three shots remaining and, disbelievingly, saw that he was placed third.

“I’m looking at the board thinking ‘that can’t be right’. I didn’t know where I was. It wasn’t until the last shot that I turned to my coach and knew it,” he said at the time.

Vella continued his great international form and regained the Men’s Trap world number one ranking in 2007.

But despite this record, Vella was controversially overlooked for Olympic team selection by a single target for the 2008 Olympic Games in Beijing where Diamond and Craig Henwood were the preferred Australian team choices.

Unbowed, Vella savoured Olympic Games selection at the 2012 London and 2016 Rio Olympic Games but was unable to qualify for the final.

But in the lead-up to the Rio Olympics, Vella enjoyed another memorable career moment when winning the 2014 Glasgow Commonwealth Games individual Men’s Trap gold medal. He was the silver medallist behind Diamond at the 2002 Manchester Commonwealth Games and was placed fourth in the event at the 2010 New Delhi Games.

Shooting in Carnoustie, Vella snuck into the semi-final round as the last of six finalists with Diamond topping the scoreboard.

Vella marched through to the four-man final with a perfect score of 15 targets while Diamond managed 12 and earned a place in the bronze medal match, which he ultimately lost to India’s Manavjit Sandhu.

In the gold medal match against England’s Aaron Heading, Vella was in control until nerves kicked in and he missed three successive targets.

‘I thought I wasn’t going to miss, that was the problem. And when I did miss it put me on the back foot. I made the fatal error of trying to adjust and didn’t attack the target,” said Vella.

“By the time I worked out to keep attacking, I had let three (targets) go. I was trying to find my rhythm and my heart-rate was up, but I pushed through to the end.

“After getting silver in Manchester, it was a long haul to get the (individual) gold. Good things come to those who wait and it’s nice to get this one under my belt,” he added.

Vella ultimately stepped down from the post at the end of the 2018 international season and concentrated on his Oz Shooting coaching, corporate shooting and events business.

An international sports career involves many sacrifices and support from family, friends and team staff. And as he proudly views his swag of medals and trophies, it proves that it was all worth the many years of effort.