Unfazed and undaunted, Hoberg ready to take on the world

Alex Hoberg is a young man reaching for the stars. At 18 years of age, he has already achieved much,  and is in a hurry to accomplish more – both on and off the range.

The rifle athlete from Adelaide already has one Commonwealth Games and a Youth Olympic Games in his resume and in 12 months’ time he will be on the line competing against the world’s best 10m Air Rifle athletes at the Tokyo Olympic Games.

Despite being a teenage Games rookie in the daunting Games pressure-cooker competition atmosphere, Hoberg holds no fear, nor does he have modest expectations.

“I want to win – that’s the goal,” he says forthrightly. “I’m not going to set my expectations any lower than that. I don’t think there is any point going to the Games thinking my goal is not to win. If you are not going there to win, you shouldn’t be there.”

When aged 12, he attended the paintball birthday party of a fellow Year 5 friend and was hooked,  but his dad, Raleigh, initially steered him towards field and target archery and purchased him a compound bow.

Soon after, Hoberg then attended a shooting range and was hooked and in 2017 he was selected in the Australian team for the Junior World Championships in Suhl, Germany.

“I remember the flight over. I wanted to stay up for the whole flight. Everyone was saying you’re crazy. I was so excited,” he recalled.

Hoberg was later selected for the 2018 Gold Coast Commonwealth Games where he reached the 10m Air Rifle final. He enjoyed a blazing start to the final and was leading after the 10, 12 and 14 shot stages in a closely contested 24-shot final.

At the 20-shot first elimination stage, Hoberg was just 0.2 points in third place behind the leader Abdullah Hel Baki from Bangladesh, and then lost a shoot-off with Ravi Kumar from India. The event was ultimately won by his Australian team-mate, Dane Sampson. Hoberg freely admits he was in tears for days afterwards knowing he was fractionally close to a medal, possibly gold, at the Games. He says an innocent single shout from the packed crowd broke his concentration.

“I heard someone in the crowd screaming out my name and then I was turned off, I wasn’t focusing any more. It was ‘oh my God, I am winning’. It was a mental turn-off that killed me,” he said.

Being a 16-year-old in an adult Games Village was also socially challenging. Because of his age, Hoberg faced restrictions and was limited to where he could go while with the Australian Commonwealth Games team.

But when he attended the Youth Olympic Games in Buenos Aires later in the year, his team-mates and opponents were all under 18 years of age. Many of his Australian team-mates remain firm friends two years later.

At the YOG, Hoberg was leading at the half-way mark in the 10m Air Rifle final before he slipped away and finished fifth. “I realised I was in first place and I went ‘don’t let what happened at the Commonwealth Games happen here’. As soon as I thought that, it was game over,” he admitted.

“I knew I was shooting the scores. I knew my training was at its peak leading up to it. Going into both 3P and Air Rifle I knew I had what it took. It was a matter of am I going to do it on the day, and for the most part I did,” he said.

In the opening nomination trial, Hoberg peeled off a personal best qualification score of 629.2, a score which would have earned a place in the 2016 Rio Olympic final but finished third in the final behind Sampson and fellow South Australian, Jack Rossiter.

With the Tokyo Olympic Games postponed by 12 months, Hoberg is maintaining a very busy schedule. 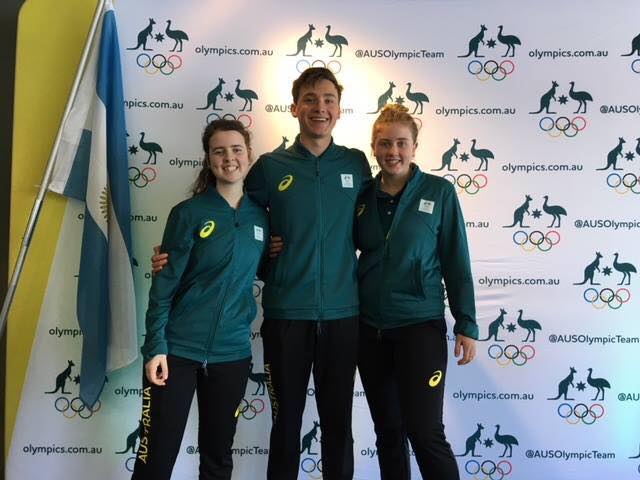 Apart from rifle practice, Hoberg is completing his school studies and working part-time at his dad’s business, 4WD Systems.

He hopes to study medicine from next year and will shortly undertake the University Clinical Aptitude Test (UCAT) – a two hour long, computer-based test which measures a range of aptitudes and skills considered to be important as a medical student and doctor.

Even though the Tokyo Games will be his first Olympics, Hoberg has already contested his first “dummy” Olympics.

“At the Rio 2016 Olympic Games, I shot a practice final with myself, the same day they shot their Air Rifle. I remember in my practice final I shot a higher score than they shot at the Olympics for the gold medal,” he said.

With a personal best score of 629.2 locked away, Hoberg is looking to perform consistently well leading into the Tokyo Games. “In training I don’t want to be shooting below that at all,” he said.

He also believes with 12 months additional training and experience he will be a better shooter. “With the same amount of commitment, motivation and training, there is no reason why I can’t perform even better in 2021 in Tokyo than I could have in 2020,” he said.

With the assistance of the South Australian Sports Institute (SASI) , Hoberg is using the services of Athens-based Greek sports psychologist, Nektarios Stavrou, to advance the mental aspects of shooting, particularly when he is leading a final.

Hoberg, like many world class athletes, doesn’t lack confidence but it is a matter of properly harnessing his full arsenal of talents to produce the best results on the day.

And who is to say that that day won’t be in Tokyo next year?