Catherine Skinner knows all too well the vagaries of Trap Shooting and the roller-coaster of emotions involved with being an elite international athlete.

One day, the spinning clay discs fly across the skyline as large as a basketball, and on others they seem as small as a pin head. At its lowest point, confidence levels can quickly drain like an emptying tide.

When Skinner first picked up a shotgun as a 12-year old growing up on her family’s cattle farm in Mansfield, 188 kilometres north-east of Melbourne, she downed 10 of 13 Down The Line (DTL) targets.

“That was a peak for about a year,” admitted Skinner.

While form can be temporary, class is long-lasting. An Olympic gold medal won at the 2016 Rio Games is proof of that.

“I remember him when aged 13 saying ‘you shouldn’t be doing DTL, you should be doing ISSF (International Shooting Sports Federation) and going to the Olympics and the Commonwealth Games because you’ve got talent’ and he offered to train us and another boy Nick Kirley in Melbourne,” said Skinner.

“At the time, I was a B grade DTL shooter and I turned him down saying I first needed to get to AA to learn to shoot before I made the transition,” she added.

Within three years, Skinner had successfully made the transition from DTL to ISSF Shooting and represented Australia at the 2006 ISSF World Junior Championship in Zagreb where she finished a commendable seventh.

She attended further Junior World Championships in 2009 and 2010 culminating in a silver medal in Munich in 2010.

2011 saw Skinner attend her first World University Games in Shenzhen, China where she claimed the silver medal, and also graduate to the world senior shooting ranks which she admits was a daunting experience.

“There is quite a gap mostly in the form of consistency. In the senior ranks, you need to shoot high scores all the time and in all conditions. It was quite daunting making that transition, but I am also surprised that I was able to convert it earlier than I thought,” she said.

By 2013, Skinner was quickly rising through the world rankings with silver medals in World Cup events held in Al Ain in the UAE and Nicosia in Cyprus. By the time the 2014 Glasgow Commonwealth Games arrived, Skinner’s confidence was rising and was further bolstered when topping the Games qualifying rounds downing 71 of 75 targets.

But her confidence flooded to over confidence and her medal hopes came crushing down when eliminated in the semi-final round.

“That was probably the last competition I went into thinking I was truly confident that I can win because I went in feeling completely prepared. I managed to shoot the top score of the day, I was ahead by so many targets, but absolutely self-destructed in that final,” she admitted.

“It was absolutely heart-breaking to go through because there is so much hype behind the Commonwealth Games and such a big event in Australian culture. I got too excited thinking gold was in the bag towards the end but started missing targets and I jumped them.”

Skinner bounced back from her intense disappointment in Glasgow capturing the bronze medal in the World Championship final in Granada.

“That was a well-timed bronze because it was also our first quota for Rio,” she said.

With the quota and her Olympic team selection secured, Skinner headed to the Rio Olympics after a gruelling 18 month’s preparation.

“It’s a long slog. I don’t think people outside the sport really realise how much work goes into it,” said Skinner.

“In order to get that spot at the Games, you are talking about 18 months of high performance. Once you are announced on that team, you’ve got three months of going flat strap. By the time they announce the team, you are already exhausted.

“And through all that time, you are anxious about each performance because of different selection policies. What are they looking for and what happens if you tank one event, or if you tank one and then another?”

And throughout her ongoing training plus domestic and international travel for high level competition, Skinner was head down in her University books completing a Chemical Engineering degree at RMIT in Melbourne.

Because of her Shooting commitments, Skinner took on a part-time University study load and, consequently, a four year degree took seven years to complete which she did in 2015 ahead of the Rio Games.

Skinner said the Olympics were “very nerve racking and high pressure” and was grateful the Shooting competition was one of the first events on the Games program.

A third and final qualifying round of 24 from 25 targets earned Skinner a sudden-death shoot-off for the 6th and final place for the finals round where she prevailed over Cynthia Meyer of Canada.

“That was the most nerve racking experience. I knew I had to be in the final for a chance (of a medal). My brother has a photo of me doubled over afterwards,” she said.

In the semi-final round, Skinner was the lowest ranked competitor and knew she had nothing to lose. With the burden of expectation removed from her shoulders, Skinner completed a near perfect 14 from 15 targets to reach the gold medal match against New Zealand’s Natalie Rooney.

In the gold medal match, Skinner’s nerves saw her miss her first target and Rooney went on to open a decisive two target lead. But Skinner gradually clawed her way back to snatch the gold medal with her final shot. 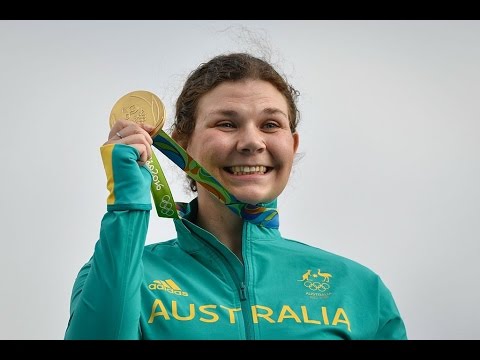 “That was the realisation that I had won a medal, I’d won an Olympic medal, and that I’d won the Olympic gold medal. And by the time I had said that to myself, Natalie had shot her final target and I turned around to absolute chaos,” she explained.

“There was a heavy dose of elation and then there is that ‘oh no, what have I got myself into” moment because you are flooded with people.”

Skinner won’t be attending the Tokyo Olympics to defend her title this year after Penny Smith and Laetisha Scanlan were named in the Australian team following the Olympic nomination trials last year.

Compared to the Rio Olympics cycle where she was shooting on average 800 targets a month, Skinner only shot around 2000 targets in training in the 12 months prior to the Tokyo Olympic nomination trials because of her work commitments.

Her training has been further limited since the outbreak of COVID-19 last year and the restrictions imposed in Victoria.

As a result, Skinner fired her first shot since the last Olympic selection events last March at the Scalzone Cup Invitational at the Melbourne Gun Club earlier this month.

But while her shotgun has been gathering dust over the past 10 months, Skinner’s Olympic ambitions have not, and she is eyeing an Australian team berth for the 2024 Paris Olympics.

“There is always the next goal, the next dream,” she said.