As we entered the new millennium, Dan Repacholi was a precocious, fun-loving 17-year old young buck who was ranked Australia’s number one pistol shooter.

The countdown to the Sydney 2000 Olympic Games was gathering pace and Repacholi hopped on a plane and headed to World Cup competitions in Milan and Munich trying to shoot a 565 qualification score to win Australian Olympic team selection.

But the pressure of the situation and being in foreign countries saw his Sydney 2000 Olympic dream explode and he was forced to watch David Moore, David Porter and David Chapman in action at the Games.

“It was an easy score to achieve,” recalled Repacholi. “I let an opportunity go past.”

Disappointed, Repacholi returned home and was then delivered a confronting opinion from an unnamed coach which still rings loud in his ears today.

“I was told I wouldn’t make an Olympic Games team, and I pretty much went on to prove them wrong and show that I can do it,” he said.

“I don’t know why they said it, and I never asked. I don’t know if they were trying a bit of reverse psychology.”

If it was reverse psychology, it certainly worked as Repacholi will line-up for his fifth Olympic Games in Tokyo next year surpassing four-time Australian pistol Olympians, Lalita Yauhleuskaya and Phillip Adams.

As painful missing selection for Sydney 2000 was for Repacholi, he now admits it was a blessing in disguise as his sporting career ambition would have been done and dusted if selected.

“In hindsight, it was the best thing that ever happened because if I made that Olympic Games team, I reckon that it would have been my only Olympics,” he said.

Despite attending four Olympic Games in Athens in 2004, Beijing in 2008, London in 2012 and Rio in 2016, Repacholi’s ambitions remains restlessly unfulfilled.

“It’s been a great time. I’ve loved every Olympic Games. Everyone has been different. Unfortunately, I haven’t gone and achieved what I wanted to achieve yet, and that’s coming home with an Olympic Games gold medal. But Tokyo is coming up and I will be giving every bit I can to go there and win,” he said.

“The number of Games is irrelevant because I haven’t achieved what I want to achieve yet. I’ve got enough tracksuits,” he says forthrightly.

“I’m not finished. I want to go on and win at an Olympic Games and finish with a score and say, ‘ that was me, that was a really good score’,” he said.

His renewed drive comes after twice retiring from the sport.

After the London Olympics, he and his wife Alex gave birth to their first daughter, Zoe, and he decided to down the pistol.

But in the lead-up to the 2014 Glasgow Commonwealth Games, Alex convinced him to return to the sport and he responded by winning the gold medal in the 10m Air Pistol and a bronze in the 50m Air Pistol.

The Rio Olympics came and went, and he then focused on the 2018 Gold Coast Commonwealth Games.

He knew how special a home Games was after winning a gold medal in the 50m Pairs and a bronze in the 10m Pairs in front of family and friends at the Melbourne 2006 Commonwealth Games.

But the Gold Coast Games were extra special. Alex, Zoe and his second daughter, Asha, were in the stand watching and, after finishing fourth in the 10m Air Pistol, Repacholi was a decisive winner of the 50m Air Pistol.

“Gold Coast topped it for sure. The best. To do it in front of my wife and two little girls, that was an amazing thing,” he said.

Repacholi retired again after the Gold Coast Games to spend more time with his growing family, but again Alex and his girls stepped in and urged him to aim for Tokyo.

“It was one of the best things I did because now my kids can come and see me shoot,” he said. 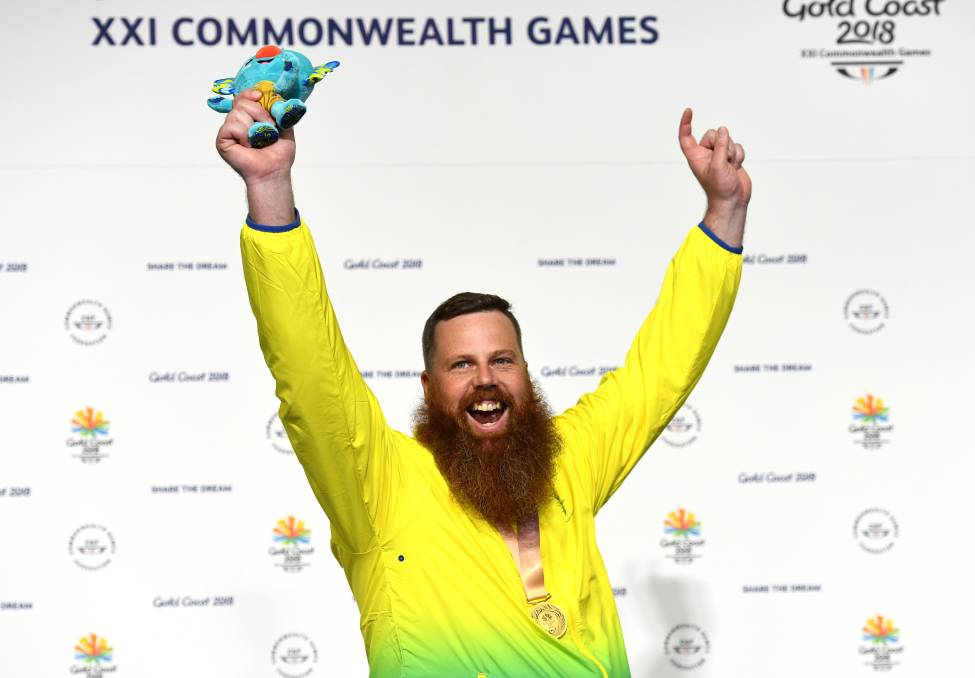 And he keeps his girls involved when competing. Renown for wearing rainbow coloured socks in competition, his girls now select what socks he is to wear.

Off a limited preparation, he secured a Minimum Quota Score in the 10m Air Pistol at the Oceania Championship last November, and then topped the nomination trials earlier this year to book his ticket for Tokyo.

“I’m not finished until my wife tells me to now,” he says with a grin. “When she says that I can’t do it anymore and that I must be a proper husband and a proper father, like most fathers who stay at home and do everything with their kids and wife. When she tells me that, then it’s all over unless I decide I will pull the pin a little earlier and say I’ve had enough. But there’s still a lot I want to achieve.”

At the nomination trials, he was locked into a close contest with Bailey Groves before managing a seven shot victory, but he knows he is capable of much more.

In 2016, the six Rio Olympic finalists reached the final with a qualification score of 580 and higher from a possible 600 points. A score of over 580 will be the required target to reach the final in Tokyo. With a personal best score of 587, he knows he is certainly capable.

“As long as I can shoot around that level in the mid-580s, then I will be in the right area and I will give myself a really good chance to make that final. I’ve got to get in the right mental frame to be able to get that happening on a consistent basis. In finals, I shoot well. I enjoy them. I like the format of a final,” he added.

To prepare for Tokyo, Repacholi has set up a 10m indoor pistol range in a warehouse at Double R Equipment Repairs, where he works, in Rutherford in NSW’s Hunter Valley and trains before and after work.

“I quite enjoy it to be honest. It’s a good time to be on your own and think.  It’s just you, a target and a gun. That’s all there is. There’s nothing else,” he said.

Apart from firing shots on his range, Repacholi is looking to lose weight, go back to shooting basics and spend considerable time getting himself mentally ready for Tokyo. He says technically he can match it with the best in the world but need to improve between his ears.

“My whole shot process takes about 35 seconds from when I start it to when I finish it. So, I’ve only got to concentrate for that 35 seconds.”

Given his lack of high level preparation leading into the Olympic nomination trials, Repacholi is delighted the Tokyo Games have been postponed by 12 months and believes a combination of selection certainty and long-form training and competition will have the Australian team poised to produce strong results.

“I think it’s a really good thing for us. I reckon we are going to have some fantastic results because we’re going to have this time to mentally prepare ourselves. Physically, everyone in this shooting team can win. It’s just whether we can control ourselves mentally. That’s what wins it all,” he said.

Shooting at a top international level spanning more than two decades, Repacholi estimates it has cost him up to $1 million.

“Any sport you do at a high level is expensive with all your travel, all your training commitments. From out of pocket expenses, unpaid leave, missing out on work, it wouldn’t be far from it ($1 million),” he said.

But Repacholi wouldn’t change a thing after competing for over two decades on the world stage.

And with his steely focus on the medal dais in Tokyo, it has been a great investment for a gentle bearded giant who was told he’d never make it.