When Australian Skeet shooter Paul Adams steps onto the Asaka Shooting Range at the Tokyo Olympic Games in July, he will proudly carry the words of his late grandfather tattooed above his heart while his message will burn in his ears.

It was Adams’ late grandfather, Ian Mathieson, who introduced him to Shooting as a 10-year old boy on a rural property in western Queensland.

As a mark of his respect and admiration for his grandfather, the 2016 Rio Olympian had his words “One at a Time” and his initials “IWM” permanently etched on his body before he passed away in December 2017.

“That was his mantra. He always told me that,” said Adams. “I tell myself that every time I go into shoot. It’s quite funny how many people say it all the time. They don’t know I’ve got the tattoo and I kind of chuckle to myself when I hear it.”

It’s a simple philosophy Adams has followed throughout his career ever since making his international debut when winning the silver medal at the 2011 Oceania Championships.

Adams, aged 28, originally competed in Sporting Clays, but the powerful lure of representing Australia at the Olympic Games saw him cross over to shoot ISSF Skeet in 2009.

Ten years on, Adams will be attending his second Olympic Games in Tokyo and has already experienced the 2014 Glasgow and 2018 Gold Coast Commonwealth Games plus five World Championships. 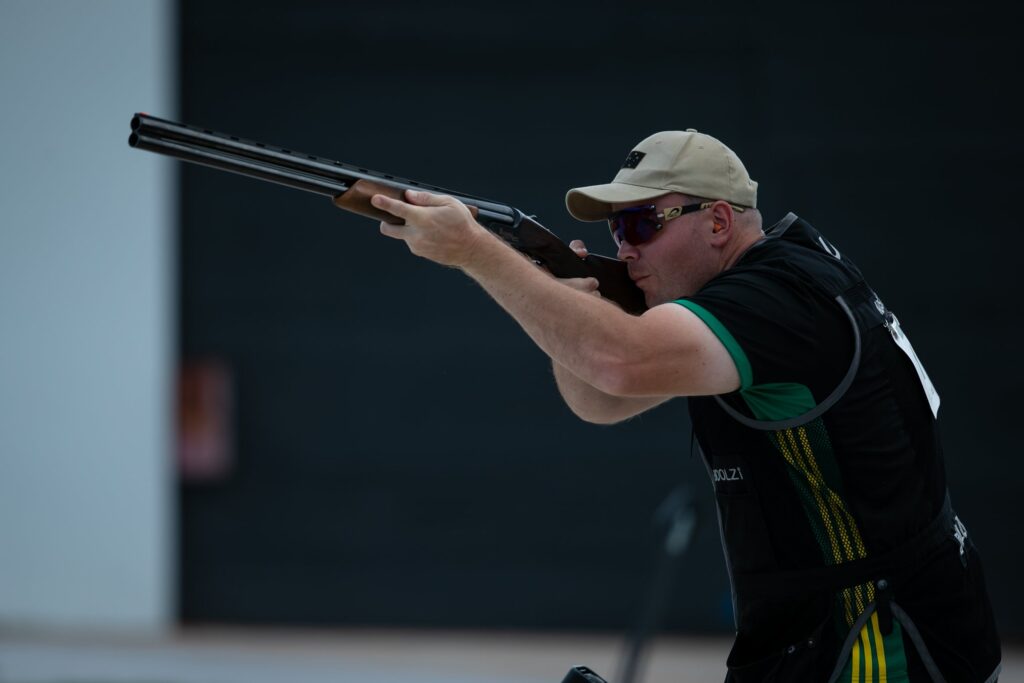 Unlike his preparations to past Olympic and Commonwealth Games where he combined high volume training on the range and intensive regular gym work-outs, Adams is adopting a “less is more” approach to his build-up to the Tokyo Games.

Adams was always planning to have a lengthy break from Shooting in 2020 and the COVID-19 pandemic saw his break commence well ahead of the planned Tokyo Olympics rather than after the scheduled Closing Ceremony.

“I took it as a good idea to have a big break. After the last selection trial for the Olympic team, I put the gun down. I didn’t open the gun safe from March until the weekend before Christmas,” said Adams.

Adams admits he was nervous when he lined up his first targets at Brisbane Gun Club before Christmas and was pleasantly surprised how well he shot.

“I’m shooting perfectly well, as well as I was before I left (for a break), so I can take it as a sign that I don’t need to overtrain. I’ll just take it nice and easy and gently and keep working like I am and shoot every now and then. I think this will be part of the idea that I will take into Tokyo,” he explained.

Adams, who has enjoyed long-term support from the Queensland Academy of Sport, is currently shooting between 100-125 targets a week but will elevate this number as domestic competitions arise in coming months in the countdown to the Olympics.

“This might be the key. I’ll shoot lightly and a couple of weeks before competition, I’ll shoot a little more intensely,” he said.

Adams’ approach to Tokyo has the support of National Shotgun Coach, Rich Sammon.

At the 2016 Olympic nomination trials, it was Adams who claimed the second automatic Australian team selection ahead of Sammon.

“I stir him up saying he couldn’t go as an athlete but is now going as a coach,” laughed Adams.

“He’s (Sammon) done an amazing job. He’s a really good person to have on our team. It’s a very difficult job and like all any job that you do, some people aren’t going to like you, or like the answers, or the decisions you make,” added Adams. Following this episode of aerophobia, Adams had his sights on the 2014 Glasgow Commonwealth Games, where he was third in qualifying and finished sixth, and he has travelled widely ever since including the 2016 Rio Olympics where he was placed 19th.

“It’s (Shooting competitions) been the best way to travel around the world. I’ve had so many life experiences in the last 10 years,” he said.

Apart from his two Oceania Championship gold medals, Adams has also earned one silver and two bronze medals on the highly competitive ISSF World Cup circuit in 2017 and 2018.

“It’s fantastic that Shooting Australia saw something in me and still see something in me to keep me on the High Performance Team. And I’ve been able to give them results and some medals back. We’re enjoying the ride together,” he added.

Also enjoying the ride is his mother Sue, also a nurse, who has been by his side throughout his sporting and professional career.

“Mum was the one who took me to all the shoots when I was a little one. I couldn’t drive and she was the one who drove everywhere and gave up her weekends and spent most of her money on me, buying all the ammo and the gun. I thank her and praise her,” he said.

And it was also Sue who assisted her son with practical nursing tips when studying for his degree, while he later assisted her with her Bachelors of Nursing degree after she was hospital trained.

While the Tokyo Olympic Games are on the immediate radar, the 2024 Paris Olympics are also in his long-term sights, particularly as Mixed Skeet will be introduced to the Games competition schedule.

“That will give us an extra day of shooting. It will be cool to shoot more targets. I think it (Mixed Skeet) will be more fun and more relaxed,” he said.

And close to his heart throughout the journey ahead will be his late grandfather.