Australia won a best-ever 17 gold medals at the 2004 Athens Olympic Games, but the genesis of Suzy Balogh’s gold medal in the women’s Trap was established four years earlier at the Sydney 2000 Olympics.

At the time, Balogh was a rising Trap competitor who began her international career two years earlier in a World Cup event in Brunei.

After winning the women’s Trap in the Sydney Olympics Test event earlier in 2000, Balogh and men’s Trap athlete Adam Vella were invited to be fillers at the Sydney Olympics – the 18th person in the qualification round which would allow the full rotation of shooters from the five shooting stations.

On the scoreboard, Balogh and Vella’s names weren’t listed, and neither was their nationality.

“It was the oddest time of my life. I wasn’t a volunteer, I wasn’t a competitor, I was in this no-man’s land,” recalled Balogh.

“I couldn’t go out into the public area. I couldn’t go in the athletes area. When I wanted to go to the toilet, I had to leave my gun with someone and borrow someone’s pass and head off,” she said.

Despite being this random unknown, Balogh relished the experience and shot a qualification score which would have been good enough to reach the Olympic women’s Trap final.

“It was a life changing experience in that I only thought of myself as a shooter. Seeing how the mechanism of the Olympics worked and how these people competed, it allowed me to realise they’re athletes. You’ve got to put the effort in, and you’ve got to have the dream,” she explained. “It also allowed me to think I grew up with Michael (Diamond). I shot with Russell (Mark). I’d spent training camps with these guys. I’ve competed against them. I’ve really rubbed shoulders with them. So, it really inspired in me that it was possible to win a gold medal.

With a completely new perspective on her sport and fuelled by a burning ambition to become an Olympian, Balogh won selection two years later in the Australian team for the 2002 Manchester Commonwealth Games where she won a bronze medal in the women’s Double Trap Pairs alongside Susie Trindall.

While she was delighted to climb onto the medal dais, the experience taught her further valuable lessons.

“It was brilliant that I got a Commonwealth Games bronze medal, but just about everyone else on the team came away with a gold, and I’m talking Rifle, Pistol and Shotgun,” said Balogh.

“I came away feeling like I hadn’t put enough effort in. I needed to restructure my life, I needed to set more goals, I needed to be more professional like taking onboard sports psyches. I was always carrying injuries and I needed to get a lot fitter and stronger.

“It (Manchester) said, ‘Suzy you’re behind the eight-ball. Come on, pick up your game’,” she admitted.

At the time, Balogh was working in Orange, in NSW’s central west, as an Agriculture Protection Officer with the NSW Department of Primary Industries and she arranged for a work transfer to Canberra to allow her to practice at the Canberra International Clay Target Club (CICTC), a short drive from her family home in Queanbeyan.

Her career and world ranking were on the rise as she travelled across the globe to compete at various international World Cup events.

In February 2004, Balogh won Australian team selection for the Athens Olympics and, a month later, she was ready to compete at a World Cup event at the Sydney International Shooting Centre.

She was going through some stretches as part of her normal pre-event warm-up routine when she damaged two discs in her back and was sent off to Fairfield Hospital.

“I couldn’t stand up. I hit rock bottom, but I was really lucky Greg Chan, the coach, had enough faith in me that I could recover,” said Balogh.

Balogh made her way to Athens where the competitors were met with windy, blustery conditions at the Markopoulo Olympic Shooting Centre – conditions Balogh relished having experienced similar at  CICTC and at a pre-Games camp in Darwin.

On the day of the Women’s Trap event, Balogh was in a positive frame of mind. On the evening prior, she had a dream about shooting and dreamt that she would win the gold medal. On the morning of the event, she looked out the window and saw the windy conditions were continuing.

After shooting two scores of 23 from 25 targets in the first two of three qualifying rounds, Balogh missed the first five targets in the final round before downing all remaining 20 targets. She thought the five missed targets would see her omitted from the six women final.

“I came off and I was so disappointed – I thought I’d thrown it all away. I went up to Greg and said ‘I’m really sorry, all the hard work that you’ve put into me. He said, ‘what are you talking about? Get yourself ready, you’re in the final’,” she said.

Not only had Balogh reached the final, but she was the top qualifier with 66 points, one ahead of Spain’s Maria Quintanal. 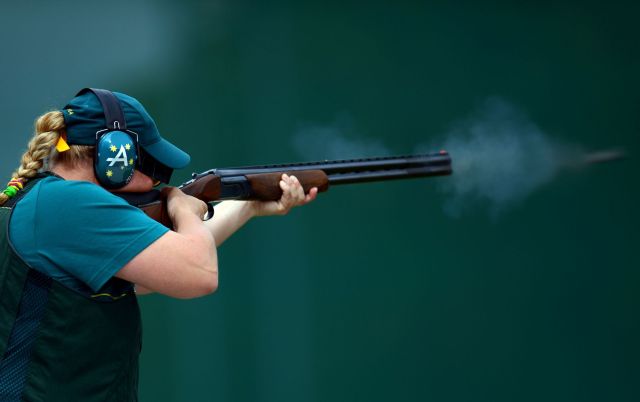 Balogh doesn’t look at the scoreboard when competing but heard the roars of the pro-European crowd when the Spaniard hit her targets.

But with four targets remaining, the crowd erupted when Balogh downed her target and only then realised she had an unbeatable gold medal winning lead over Quintanal.

Balogh was then swept up in a sea of emotions and looked up at the scoreboard and saw her name and country – Suzanne Balogh, Australia, Gold Medal – a far cry from having no name and no country assigned to her at the Sydney Olympics.

“It’s the best feeling in the world knowing all the effort you’ve gone through, all the time you spent travelling and on the range that hard work pays off,” said Balogh.

“It was such a thrill to be on a podium again and have my family there and friends and to be able to thank all those people that helped you. I’d looked up to Deserie for a long time. It was just awesome to be able to team up with her,” said Balogh.

The 2008 Beijing Olympics was firmly in Balogh sights and she was intently focused on defending her Olympic gold medal, but illness undermined that ambition.

“I’d retired from my job with the Department of Agriculture and moved home to spend more time with my family and focus just on going to the Beijing Olympics. I was ranked number three in the world, number one in Australia. I was going to those Games and I got glandular fever,” she said.

“My life was focused on that (Beijing Olympics). It was all I had. I was distraught. My hair fell out and I was in a really, really, low bad place because (in my mind) I was going to defend a gold medal. I was ready and, on the world scene, I had shot brilliantly, and the rug had been pulled from under me. It was distressing.

“That’s when I changed my life around, moved to Sydney, started up my (Hitting Targets) business so I could be where I needed to train to get myself to the Delhi Commonwealth Games, and started to fill up my life again,” she added.

However, she was controversially overlooked for selection for the Delhi Games despite shooting the second best score in the three event qualifying series. She parked her selection disappointment and turned her attention to the 2012 London Olympics. But her performance was severely hampered by a stomach virus in the days leading up to the competition which saw her placed on an intravenous drip.

Balogh qualified third for the final shooting 72 from 75 targets in the qualification round, but Italian Jessica Rossi was peerless shooting a perfect score of 75 before only missing one target in the final to finish with a World and Olympic record of 99 from 100 targets.

In the final, Balogh’s taxing illness caught up with her and she missed the first three targets and then decided to set aside medal aspirations and enjoy the remainder of the final. “I look back on London and I’m super proud what I did. I shot a personal best and an Australian record,” she said.

Although she will not be attending the Tokyo Olympic Games next year, Balogh will be playing a key role with Australian team members and inspiring the next generation of Olympic hopefuls.

Balogh has teamed up with other Olympic gold medallists as part of the Australian Institute of Sport’s Gold Medal Ready program where they assist Tokyo team members from all sports to prepare mentally and physically for the Games.

She is also one of several Olympians involved in the Australian Olympic Committee’s Olympics Unleashed program where they look to inspire and motivate school students to be their personal best.

When able to personally attend the school, she gladly allows the students to hold and inspect her Athens Olympic gold medal.

“To me, the medal is a lovely token of years and years of hard work and achievement. It’s just not my medal, it’s Australia’s medal as well,” she said.