Potent by name, potent by ability

Name an athlete who has claimed two World Championship titles 28 years apart and captured an Olympic medal along the way?

Warren Potent is not a name which immediately springs to mind in the list of Australian sports greats, but the five-time Olympic Rifle shooter deserves to be listed in elite company.

In an amazing career, Potent captured his first World Championship title in 1986 as the rookie 24-year old member of the Australian 50m Rifle Prone Team, and later seized his individual 50m Rifle Prone World title in Grenada, Spain in 2014 at the ripe age of 52 years.

Throw in his 2008 Beijing Olympic Games bronze medal, four Commonwealth Games medals including a gold, and over 11 World Cup and Oceania Championship gold medals, then you have an understanding why Potent is regarded as one of Australia’s all-time Shooting greats.

Like many other Australian sports champions, Potent fell into Shooting by accident as a 16-year old schoolboy in Sydney’s western suburbs.

At the time, Potent was a rising, enthusiastic tennis player and was invited by a mate to go have a shot at Blacktown Rifle Range. Potent enjoyed the experience and returned every fortnight.

At the end of season Awards evening, Potent was presented with the Encouragement Award.

“It encouraged me to keep going. After playing tennis for so many years and getting nothing and doing shooting for six or eight months and getting a trophy, I thought this is pretty good,” he recalled. 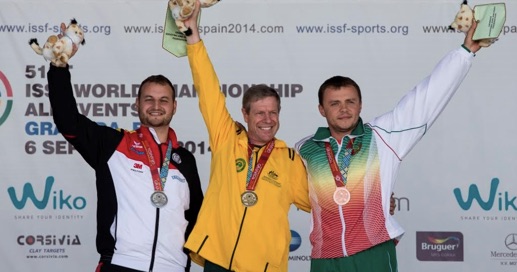 Potent quickly rose through the club, state and national ranks and was named as the team rookie, alongside seasoned international Olympic athletes Don Brook and Alan Smith, in the Australian 50m Rifle Prone Team to contest the 1986 World Championships held in Suhl.

At the time, Suhl was behind the Berlin Wall in East Germany and the memories remain vivid for the amiable Potent.

“It was very interesting. During the Opening Ceremony, you knew who the good guys were and who the bad guys were. Apparently, we were the bad guys” he said.

“It was amazing to go away on my first trip overseas and come back as a world champion and share a world record with two friends,” he said.

Despite his World Championship gold medal, Brook and Smith were preferred selections for the Australian team at the 1988 Seoul Olympics and Potent was named a reserve.

“I wasn’t disappointed. I am a realist. I know how things work. Alan Smith and Don Brook were better shooters than I was at that time,” he said.

Potent then slipped out of high level Shooting for several years to dedicate his time to a business franchise before he was drawn back to the scene after Sydney was awarded the 2000 Olympics in 1993.

“Winning the (Olympic) Bid whet my appetite again and I decided to give it ago. I started training again and started to make teams again,” he said.

In 1998, he attended the first of his four Commonwealth Games and picked up the bronze medal in the 50m Rifle Prone Teams event with Timothy Lowndes.

His Olympic Games dreams were realised at the Sydney 2000 Olympic Games, the first of his five Olympics, where he finished 19th.

“I walked away knowing that was the best I could do. I walked away without any ‘what ifs ‘and that’s what I was happy about,” he said.

But later in 2006 at the World Championship in Zagreb, he switched to a new Swiss-made rifle and suddenly a new Shooting world opened.

“That one shot changed my whole mental perspective, and I went through and made the final. After that, I gained so much confidence and, for some reason, I had a lot of fun and I found everything easy for a long time,” he added.

Between 2007 and 2010, Potent was a force on the international stage peeling off seven World Cup victories, including a record-breaking three wins in 2009, plus the gold medal at the 2008 World Cup final in Bangkok. 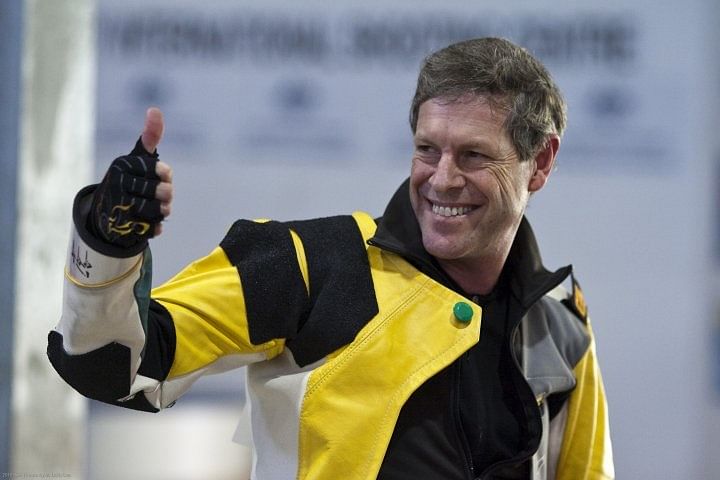 He also became Australia’s first and only Olympic Rifle medallist when capturing the bronze medal in the individual 50m Rifle Prone at the 2008 Beijing Games.

Potent arrived as one of the gold medal favourites and shot an impressive five consecutive scores of 99 out of 100 in the qualifying round before a perfect sixth and final round score of 100 saw him ranked fourth for the final.

But with qualifying scores carrying forward into the final, Potent was at long odds to claim the gold medal from Ukraine’s Artur Ayvazyan who shot a near perfect qualifying score of 599 out of 600.

“Knowing that I always have been a reasonably good finals shooter, I knew I had a chance of climbing up and getting on the dais,” he said.

In the final, Potent registered 105.5 – the best score of all finalists – to jump into the bronze medal position, a mere 2.2 points from the gold medal.

“It was probably three shots to go when I realised I was coming third. I got really wound up, the nerves really started kicking in, the heart rate really pounded, and the last three shots were phenomenally good,” he said proudly.

“I always wanted to be an Olympian ever since I was a little kid, and I finally got to go onto the dais at an Olympic Games. I think I was the most excited person on the dais,” he added.

Making the moment even more emotional was the passing of his mother Joyce three months prior to the Games after a battle with Alzheimer’s.

“Loved ones certainly help to inspire you,” Potent said after receiving his bronze medal.

“She would’ve probably been my biggest fan, from junior days to now. I thought about her just before I started qualification. I got a bit emotional before I started and told myself to pull `yourself together and get going’,” he said at the time.

Potent continued to represent Australia at the 2010 New Delhi Commonwealth Games picking up silver medals in the individual and teams 50m Rifle Prone events but failed to reach the final at the 2012 London Olympics.

Having made the decision in 2013 to retire after the 2016 Rio Olympic Games, 2014 was a year of immense satisfaction for Potent where he finally captured an elusive Commonwealth Games gold medal in Glasgow before triumphing at the World Championship in Grenada.

“Qualifications went good, I shot consistently right to the end. I just let it happen. In the final I just shot as good as I could,” he said of his performance in Grenada.

While Potent will continue to shoot with the Legion Club in Sydney, his international retirement could not have been better timed with the 50m Rifle Prone event removed from the Tokyo Olympic competition program next year.

“It’s a shame to be honest. A lot of people, who probably would have made it to an Olympic Games,  won’t be able to now,” he said.

Instead they will be relying on World Championships to define their sports careers. And as Potent has shown, Shooting is a sport where time is on your side.